A very damp St Mawgan Airshow and drier arrivals day. Not sure what year these were taken(the Vulcan maybe a different year as it's suspiciously sunny), some time in the late 80's I think. 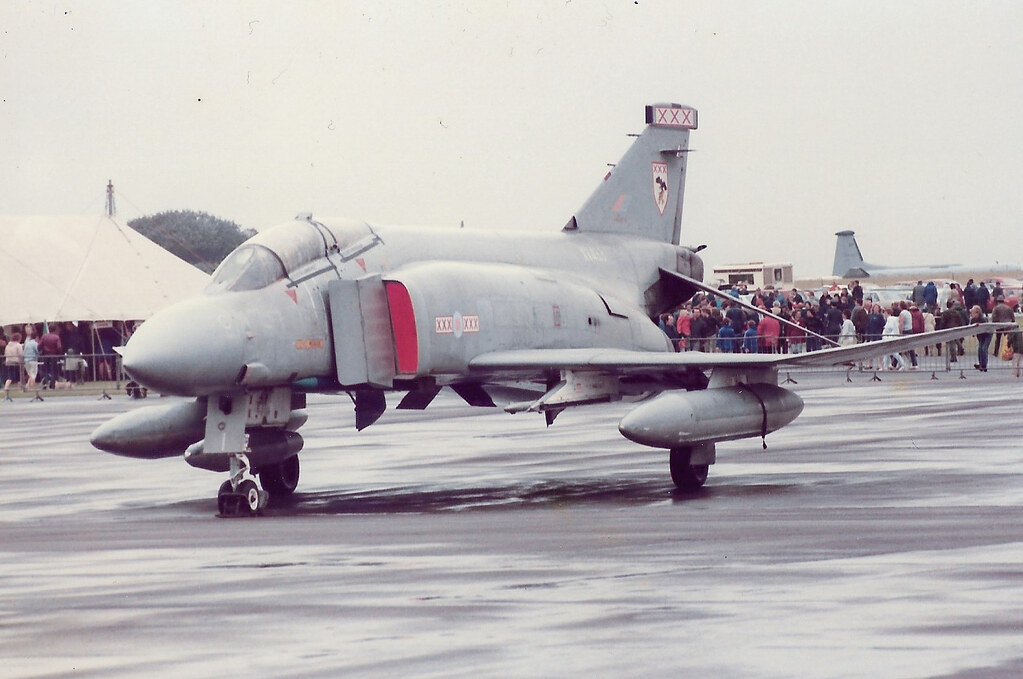 If I recall correctly, 426 was 558s predecessor as display ship of choice until her FI dictated a change

Would that hooter have been one of the Vikings

I don't remember seeing the Vikings at St Mawgan,so I think the German 104 was a singleton.

I've checked my logs and your pictures were taken at the airshow on 7th August 1985, and Vulcan XL426 was also present that year. As a native Cornishman who attended virtually all of the St Mawgan shows from the early 60s through to the last one around 1998, I think I can explain the 'suspiciously sunny' background. If I remember correctly, St Mawgan switched from the traditional mid-September Battle of Britain airshow format to the mid-week August date to capitalise on the large numbers of tourists that were present in mid-summer. On the plus side, the mid-week date meant that the show seemed to attract a lot more 'passing' foreign visitors, particularly British but also French and UK-based USAF. However, on the downside, the weather on show days invariably started off cold, wet and pretty miserable. By lunchtime however, and by virtue of the prevailing south westerly breeze, the clouds would clear away and the sun would come out for the rest of the day. By process of deduction, I suspect your Vulcan shot may have been taken on the same day, but when landing at the end of it's afternoon display slot!

Thanks for posting - we don't see many pics from St Mawgan on here. (Note to self - must start to digitise some of my own pics). As a teenager I spent many, many happy hours at the end of the runway at St Mawgan, not to mention a few Chipmunk flights there with the Air Cadets. I even managed to get on board a Nimrod once, only for the flight to be scrubbed - apparently the first time they had ever canned a flight due to engine failure on start-up. Happy days!

Some nice hardware on show there.

Never got to any of the St Mawgan Air Shows, so nice to see these. Thanks for posting.

Great pics - I remember this show very clearly. I'm also a proud Cornishman (in exile) and spent a fair amount of time at St Mawgan - we probably met at some point? I'm sure you would have met my cousin Chris Lethbridge (RIP) who visited almost every Wednesday without exception.

The Italian F104s were very faded and the RAE Bucc was from the arrivals day IIRC?

That year I remember the hardstanding in front of the huge 'Nimrod' hangar was coated in some kind of brown substance - it certainly didn't reflect light very well for photography!

Was it 1984 that a load of French aircraft were due in on the day and even got close to the airfield, but 8/8 of the deck prevented them from attending. By 6pm that evening the sun was shining!
Top

A great set of some great aircraft
Top

Nice selection of P3’s there, good nostalgia, that 8G UC12 brings back some memories.
Top
Post Reply
10 posts • Page 1 of 1

Users browsing this forum: Richard B and 18 guests